You can also read this article in French or in Spanish.

Leonardo da Vinci (15 April 1452 – 2 May 1519) was an Italian polymath of the High Renaissance who was active as a painter, draughtsman, engineer, scientist, theorist, sculptor and architect. While his fame initially rested on his achievements as a painter, he also became known for his notebooks, in which he made drawings and notes on a variety of subjects, including anatomy, astronomy, botany, cartography, painting, and paleontology. Leonardo’s genius epitomized the Renaissance humanist ideal, and his collective works compose a contribution to later generations of artists matched only by that of his younger contemporary, Michelangelo. Leonardo is among the greatest painters in the history of art and is often credited as the founder of the High Renaissance. Despite having many lost works and less than 25 attributed major works—including numerous unfinished works—he created some of the most influential paintings in Western art. niood lists the 10 Most Famous Artworks of Leonardo Da Vinci:

The Mona Lisa is an oil painting by Italian artist, inventor, and writer Leonardo da Vinci. Likely completed in 1506, the piece features a portrait of a seated woman set against an imaginary landscape. Rendered similarly to Renaissance portrayals of the Virgin Mary, the piece features a female figure—believed by most to be Lisa Gherardini, the wife of cloth and silk merchant Francesco Giocondo—from the waist up. She is shown seated in a loggia, or a room with at least one open side. Behind her is a hazy and seemingly isolated landscape imagined by the artist and painted using sfumato, a technique resulting in forms “without lines or borders, in the manner of smoke or beyond the focus plane.” Her gaze is another bewitching part of the composition. Many believe that her eyes follow you across the room, making her an active participant when being viewed, rather than remaining an object to look upon. In addition to its mysterious appearance, her expression has resonated most strongly with art historians for its possible symbolism, as many believe it to be a clever “visual representation of the idea of happiness suggested by the word ‘gioconda’ in Italian.”

One of the most popular reasons for the worldwide appeal of the Mona Lisa is its smile. Da Vinci used optical illusion to create a unique smile through perspective and shadow work. Da Vinci painted the Mona Lisa in such a way that the eyes of the Mona Lisa fall directly into the viewer’s focus, while the lips fall just below the periphery of vision.

The facial expression gives the picture a puzzling quality and makes the viewer ask what the model thought, who she was and why she appears happy and sad to some.

The Last Supper is Leonardo’s visual interpretation of an event chronicled in all four of the Gospels (books in the Christian New Testament). The evening before Christ was betrayed by one of his disciples, he gathered them together to eat, tell them he knew what was coming and wash their feet (a gesture symbolizing that all were equal under the eyes of the Lord). As they ate and drank together, Christ gave the disciples explicit instructions on how to eat and drink in the future, in remembrance of him. It was the first celebration of the Eucharist, a ritual still performed. Specifically, The Last Supper depicts the next few seconds in this story after Christ dropped the bombshell that one disciple would betray him before sunrise, and all twelve have reacted to the news with different degrees of horror, anger, and shock.

The drawing, which is in pen and ink on paper, depicts a male figure in two superimposed positions with his arms and legs apart and simultaneously inscribed in a circle and square. The proportional relationship of the parts reflects the universal design. And a “medical” equilibrium of elements ensures a stable structure. These qualities are thus shared equally by God’s creation of the human body and the human being’s own production of a good building. This image provides a perfect example of Leonardo’s keen interest in proportion.

The portrait of a man in red chalk (c. 1510) in the Royal Library of Turin is widely, though not universally, accepted as a self-portrait of Leonardo da Vinci. It is thought that Leonardo da Vinci drew this self-portrait at about the age of 60. The portrait has been extensively reproduced and has become an iconic representation of Leonardo as a polymath or “Renaissance Man”. Despite this, some historians and scholars disagree as to the true identity of the sitter.

The Virgin of the Rocks (Italian: Vergine delle rocce), sometimes the Madonna of the Rocks, is the name of two paintings by the Italian Renaissance artist Leonardo da Vinci, of the same subject, with a composition which is identical except for several significant details. Both paintings show the Mary and child Jesus with the infant John the Baptist and an angel Uriel, in a rocky setting which gives the paintings their usual name. The significant compositional differences are in the gaze and right hand of the angel. There are many minor ways in which the works differ, including the colours, the lighting, the flora, and the way in which sfumato has been used. Although the date of an associated commission is documented, the complete histories of the two paintings are unknown, leading to speculation about which of the two is earlier.

This unfinished portrayal of a young woman with disheveled hair (hence its nickname, scapigliata) is principally a brush drawing with some pigment, its treatment similar to other incomplete works by the artist. Yet the contrast between the sketchiness of the hair and neck and the refined modeling of the face must be intentional. It suggests that Leonardo was inspired by a passage (well-known during the Renaissance) by the ancient Roman author Pliny the Elder. Pliny remarked that the great artist Apelles left his last depiction of the Venus of Cos incomplete and that the work was nonetheless more admired than his first, finished painting of the goddess.

The Lady with an Ermine, also known as Portrait of Cecilia Gallerani, was a precursor to the Mona Lisa in how it portrayed a woman’s mystique in an elegant manner. One of the painting’s most curious aspects is the repetition between woman and beast: in its pallor and pointed features the ermine delivers a mirror image of its owner, although its musculature clearly marks its out as male. More literal layers of obfuscation are created by the transparent veils draped over Cecilia’s head. It is a picture shrouded in mystery. The ermine cradled in the arms of Cecilia Gallerani illustrates Leonardo’s persistent interest in, and affinity for, animals: both the power and intricacy of their anatomies and their emblematic force. He sketched galloping horses, the gait of a bear, dogs’ paws and birds in flight.

Salvator Mundi (Latin for ”Savior of the World”) is a painting attributed in whole or in part to the Italian High Renaissance artist Leonardo da Vinci, dated to c. 1499–1510. The painting depicts Jesus in an anachronistic blue Renaissance dress, making the sign of the cross with his right hand, while holding a transparent, non-refracting crystal orb in his left, signaling his role as Salvator Mundi and representing the ‘celestial sphere’ of the heavens. The painting was sold at auction for US$450.3 million on 15 November 2017 by Christie’s in New York to Prince Badr bin Abdullah, setting a new record for most expensive painting ever sold at public auction.

Flawless chalk-white skin, porcelain-fine features, and a reserved, somewhat impenetrable expression reflect the refinement of the 16-year-old Ginevra de’ Benci. Like most portrait subjects of the Renaissance, she was from a wealthy family, and educated. The marble appearance of her complexion – smoothed with Leonardo’s own hand – is framed by the undulating ringlets of her hair. This then contrasts beautifully with the halo of spikes from the juniper bush. Leonardo veiled the background of this portrait in a thin veil of mist known as sfumato; this being created with overlaid oil glazes. Though Leonardo did not create this effect he becomes well-known for his skillful use of it. 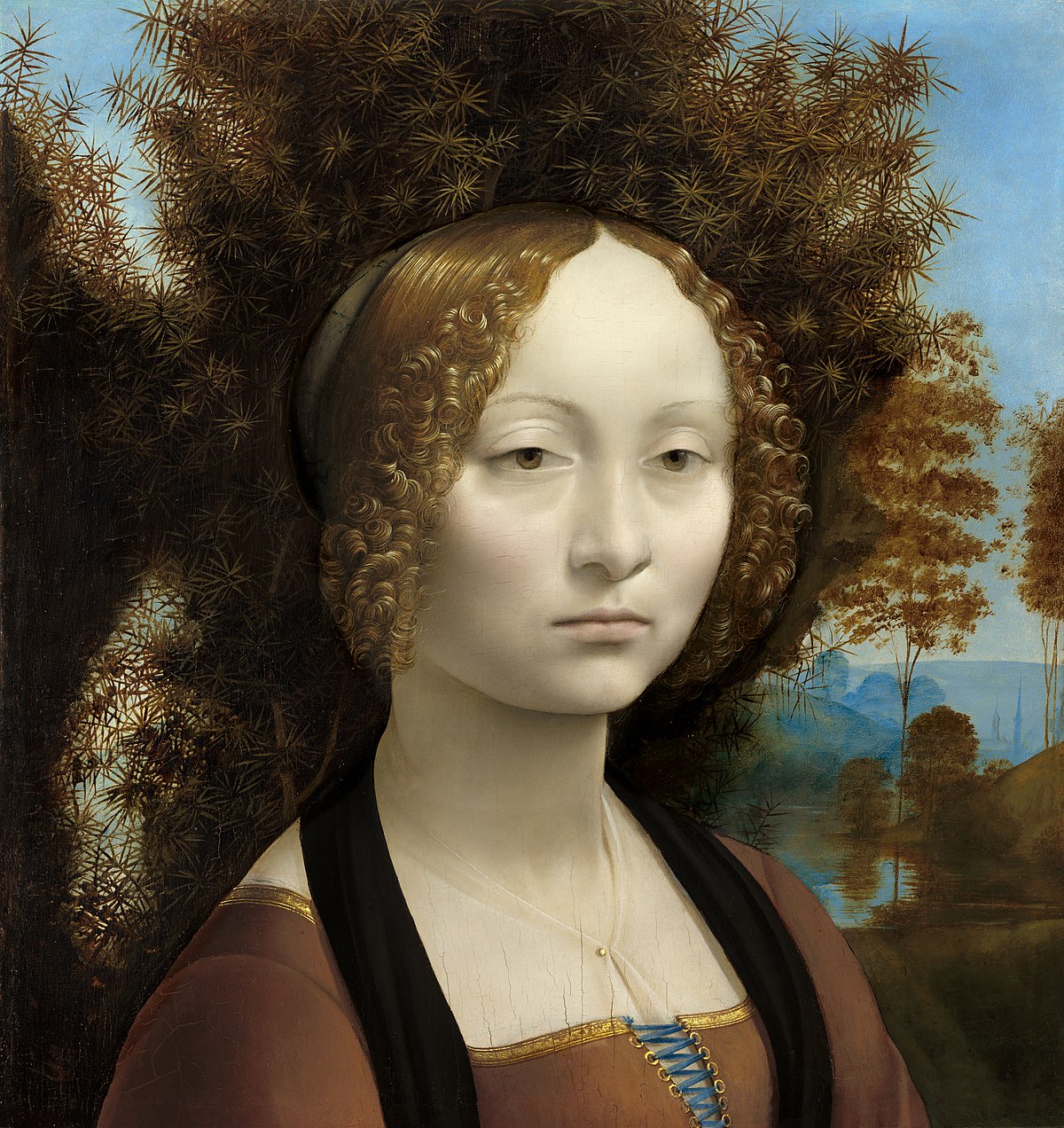 The Virgin and Child with Saint Anne is an unfinished oil painting of c. 1503 by Italian Renaissance artist Leonardo da Vinci depicting Saint Anne, her daughter the Virgin Mary and the infant Jesus. Christ is shown grappling with a sacrificial lamb symbolizing his Passion as the Virgin tries to restrain him. 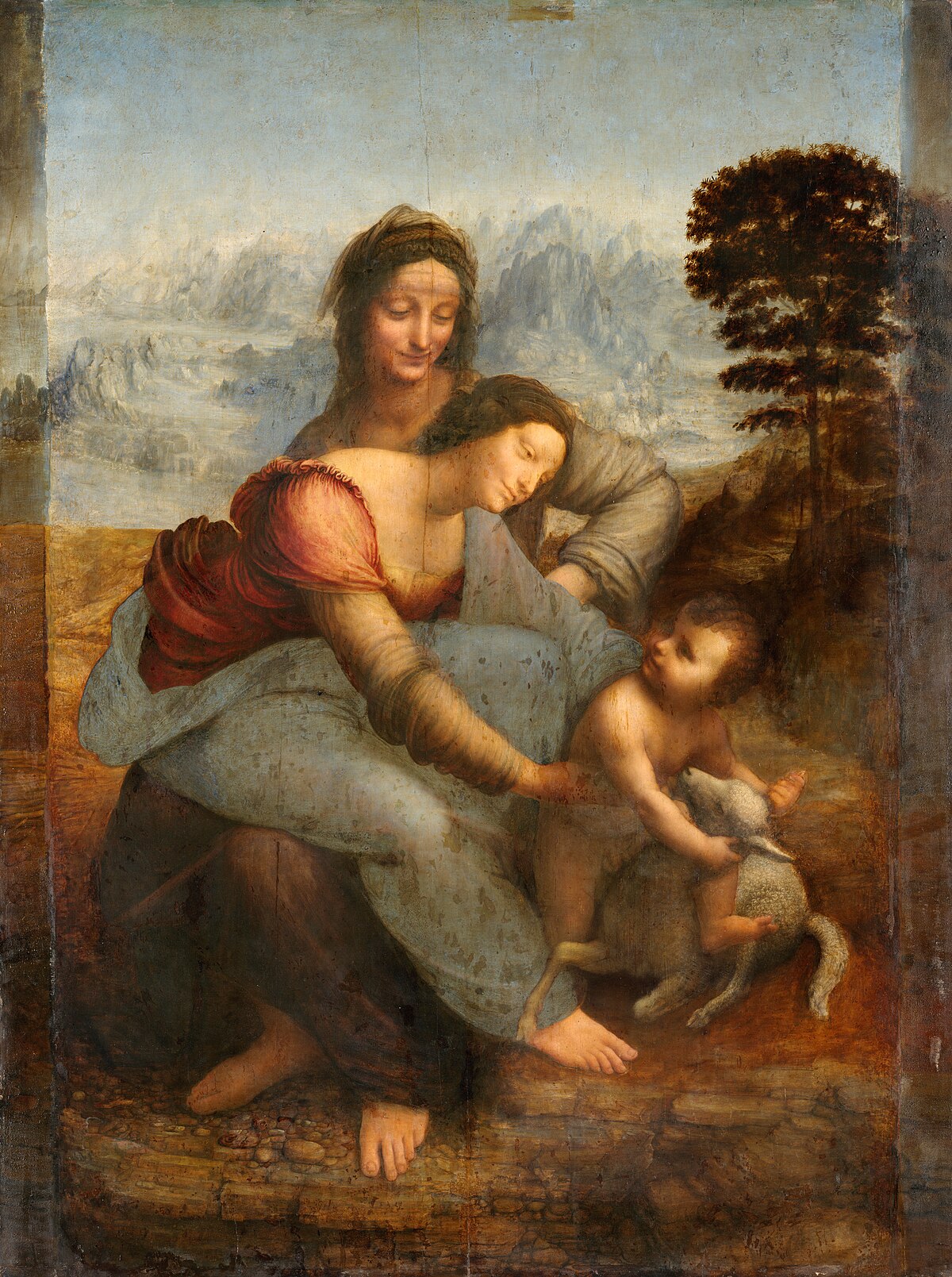 The 10 Most Famous Artworks of Piet Mondrian

The 10 Most Famous Artworks of David Hockney

The 20 Most Famous Paintings At The Louvre Museum, Paris

The 10 Most Controversial Artworks That Changed Art History

Stay at One of Slim Aarons’ Most Iconic and Favorite Hotels